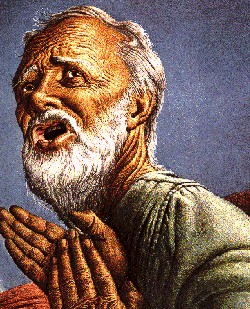 This is a picture of Abraham
In Judaism there are many important figures such as Abraham, Moses, God, King Solomon, Isaac, Jacob, David, and Jesus.
Abraham was the founder of Judaism. Jews trace their roots back to Abraham. From the time Abraham was born he only believed in one God. It is thought that Abraham smashed all his fathers idols, except for the biggest one. When his father asked what happened Abraham said that the idols got into a fight and the biggest one smashed all the little ones. His father said that the idols have no power and cannot do anything. It is thought that Abraham replied then why do you worship them. Abraham was also the founder of monotheism, which is the belief in only one God. Abraham married his wife Sarah, but they never had any children until they were old. Sarah was ninety years old she had their first son Isaac.
Moses was born in Egypt. During this time the Egyptian Pharaoh felt threatened by the amount of Hebrews in Egypt, so he ordered for all male Hebrew babies to be killed. Moses' mother did not want her baby to be killed so she set Moses on the banks of the Nile river. A Egyptian princess found and adopted Moses. As an adult, God told Moses to lead the Jews out of Egypt and Moses obeyed God's orders.  Out in the desert with the Hebrews, Moses climbed Mount Sinai to pray. When Moses came down he was holding two stone tablets engraved with the Ten Commandments. The Ten Commandments became the basis of civil and religious laws in the Jewish faith.
The Jews believe in only one God. They believe that God created the universe and everything else within it. Jews also believe that everyone has a different relationship with God. The Jews also believe that God chose them to exemplify holiness and ethical behavior.
King Solomon was the son of King David. After King Solomon assumed power he created a strong trading empire with the help of Hiram. Hiram was the king of the Phoenician City. King Solomon also built the Great Temple, where people could worship God. The process of making the temple was not easy, it created higher taxes on the people and strained the kingdom's finances. The men were also forced to work one month out of three on the temple. After King Solomon's death the Jews that lived in the northern part of the kingdom rebelled. By 922BCE the kingdom was divided into two parts. Israel was the north and Judah was the south.
Isaac was the son of Abraham and Sarah. It was tradition in the Jewish religion to sacrifice the first born male in the family, so Abraham was going to sacrifice Isaac. Before Isaac was sacrificed God sent an angel down to stop Abraham.
Jacob was the son of Isaac. Jacob also had a brother Esau, who Isaac favored more. When Isaac was old Rebecca (who was Isaac's wife) tricked Isaac into giving Jacob a blessing that was meant for Esau. Esau was not happy,so Jacob fled and lived with his uncle. Jacob had four wives Rachel, Leah, Bilhah, and Zilphah; with these women Jacob fathered twelve sons and one daughter. Later in life Jacob wanted to make up with his brother and started to send him gifts. The night before he was going to see his brother he sent his wives, kids, and all their belongings over the river. Jacob was alone to be with God when a man came. In the morning Jacob found out that the man was an angel. Jacob received a blessing and a name from the angel. The name that Jacob received was Israel.
David was the first king of Jerusalem. He established Jerusalem as the capital of the nation, as well as the place where the Ark of the Covenant was kept. Thus, a single place of worship was established. The Jewish people needed to come to Jerusalem to worship God. David did not build a temple because God told him he was not the chosen one, but his son Solomon was.
The Jewish people do not believe in Jesus Christ, they are still waiting for the Messiah.