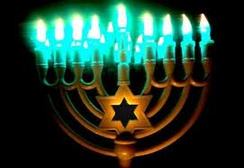 Holidays in the Jewish faith include Shabbat, Rosh Hashanah, Yom Kippur, Sukkot, Chanukah (Hanukkah), Purim, Pesach (Passover), and Shavuot.  These occasions  are all very important in Judaism.  There are also life rituals, which are birth, adulthood, marriage, and then death.
The main holidays are Rosh Hashanah, Yom Kippur, and Chanukah.  Rosh Hashanah is the Jewish new year.  It takes place approximately from the middle of September to the middle of October.  This is because the Hebrew religious calendar is based on the phases of the moon.  Rosh Hashanah also celebrates the creation of Earth as it is described early on in the book of Genesis.  There is no work involved with this holiday.  Yom kippur occurs shortly after Rosh Hashanah.  From the sundown that marks the beginning of the day, to the sun down that ends it, Jews go without food, drink, and work. Throughout the day, they reminisce on there faults they have committed in the past year.  Chanukah, or Hanukkah is much referred to as a "Jewish alternative" to Christmas.  However, instead of being one day, it is eight days.  Hanukkah takes place usually in November or December depending on their calendar.  This holiday commemorates the dedication of the holy temple in Jerusalem following the Jewish victory over the Syrian-Greeks.  Sometimes it is also called the "Festival of Lights" because it is celebrated with the lighting of the menorah, traditional foods, games, and gifts.
The first, and a rather important life ritual, is birth.  Eight days after the baby boy or baby girl is born, a ceremony is held.   For the boy, they have a ritual removal of the foreskin which is enacted with the bible verse Genesis 17:10.  Following birth comes adulthood.  A male would have his bar mitzvah, which stands for "son of the commandment", at the age of 13.  The female would have her bat mitzvah, or "daughter of the commandment" at 12 years of age.  When a man or woman reaches these ages, that is when they have the same rights as a grown man or woman.  The next life ritual is marriage.  The Jewish marriage ceremony is called the kiddushin, or the sanctification.  The ceremony happens under a religious canopy called a huppah.  The bride and groom do not see each other for a week before.  Also, traditionally, the day  before the wedding, the bride and groom fast. The ceremony itself lasts about 20-30 minutes, and then is normally followed by a celebration.  Death comes after marriage.  Funerals depend on the branches of Judaism that you belong to.